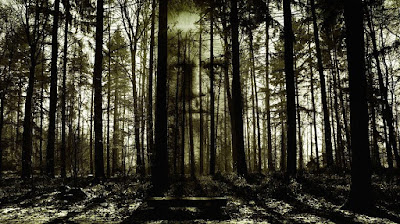 What is known of the historical Moll Dyer?

After 300 years, Moll’s name is still often heard in Southern Maryland, especially around campfires late at night, or as a warning to misbehaving little people. The movie “Blair Witch” is said to be based on Moll’s life, and if so, there were many inaccuracies. The Weather Channel recently aired a segment on her life, of course highlighting the impact of weather during colonial times. (Drought and extreme winter temperatures being intrinsic to her story).
The historical evidence of her life is mostly undocumented. Courthouse records from the late 1600’s were destroyed in a fire. However, there is evidence of two Mary Dyers arriving in Maryland around this period. There is a letter written by a colonist referencing “Moll Dyer having a countenance so ugly it hurts to behold her.” Further circumstantial evidence includes a road named after her, and likewise a small run that traverses what is said to be the original Dyer homestead.
Most stories associated with Moll indicate that she came alone to the colony from Ireland via England, but some oral tradition holds that she was accompanied by an absentee uncle or older male family member. Many reports describe her clothing as old and threadbare, but originally made of very high quality materials, such as nobility of the time might have worn. Was her attire indicative of hand-me-downs from a benevolent noble family in her past or a sign of long past and forgotten glories?
The legend of Moll Dyer is considerable. She was renowned for her curative prowess, and hated for her lack of any social graces. A virtual hermit, she traded herbal remedies with local Native Americans, and it is said she enjoyed their companionship over that of her own people. These traits, combined with a two year drought (causing devastating crop loss), an outbreak of disease, and a superstitious citizenry spelled Moll’s doom.
In the dark of the coldest winter night in 1697, the colonists rose up against her, proclaiming her a witch. They formed a mob (encouraged by the governor!) and set Moll’s cabin ablaze. Somehow she escaped her funeral pyre, and fled blindly through the woods.
Several days later, a young lad, searching for his missing cow, stumbled upon Moll’s lifeless body. She was bent over a large rock at the river’s edge, frozen solid. When Moll was pulled away, the rock bore indentations where her palms rested and her knees touched. It is said the strength of her curse on the local citizenry engraved the marks.
The 300 pound rock now sits in the courtyard of the St. Mary's County courthouse with a simple plaque proclaiming it “Moll Dyer’s Rock.” Visitors to Maryland's southernmost county, overcome with curiosity, report both curses and cures after touching the infamous rock.
Over the years, many reputable eyewitnesses have reported seeing the ghostly white figures of a woman and her wolfish dog spiriting through the mists along the small creek that bears Moll’s name. Wide eyed drivers in numerous automobile accidents have stated the same. It is interesting to read those police reports! 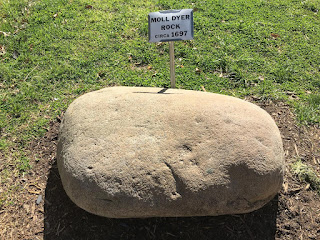 Above is the famous Moll Dyer's Rock. Believers and non-believers alike have tested the curse by placing their hands on the rock where Moll met her tragic end. Both cures and ailments have been attributed to this brave action. Have you had a go yet? Would you?
Posted by DavidWThompson at 12:24 PM